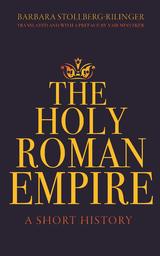 Terranova, Nadia Terranova, Nadia Adiós fantasmas
The Holy Roman Empire emerged in the Middle Ages as a loosely integrated union of German states and city-states under the supreme rule of an emperor, and would endure until its dissolution in 1806 during the Napoleonic Wars. Barbara Stollberg-Rilinger provides a concise history of the empire, presenting an interpretation of its unique political culture and remarkably durable institutions. In a narrative spanning three turbulent centuries, Stollberg-Rilinger shows how it was a political body unlike any other, bound together by personal loyalty and reciprocity, tradition and shared purpose, and constantly reenacted by solemn rituals.

Cavendish, Margaret The Blazing World and Other Writings

Sontag, Susan Against the interpretation

Manetti, Giannozzo On Human Worth and Excellence

Hustvedt, Siri Memories of the Futures