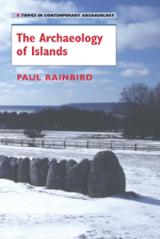 The Archaeology of Islands

Archaeologists have traditionally considered islands as distinct physical and social entities. In this book, Paul Rainbird discusses the historical construction of this characterization and questions the basis for such an understanding of island archaeology. Through a series of case studies of prehistoric archaeology in the Mediterranean, Pacific, Baltic, and Atlantic seas and oceans, he argues for a decentering of the land in favor of an emphasis on the archaeology of the sea and, ultimately, a new perspective on the making of maritime communities. The archaeology of islands is thus unshackled from approaches that highlight boundedness and isolation, and replaced with a new set of principles - that boundaries are fuzzy, islanders are distinctive in their expectation of contacts with people from over the seas, and that island life can tell us much about maritime communities. Debating islands, thus, brings to the fore issues of identity and community and a concern with Western construction of other peoples.