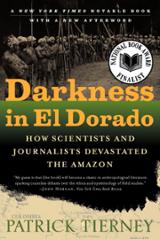 Darkness in El Dorado. How scientists and journalist devastated the Amazon

The Yanomami were first encountered in the 1960s by anthropologists who described them as the most savage and warlike of any tribe alive. Their brutal wars and sexual competition spawned countless films and books, including a million-copy bestseller, Napoleon Chagnon´ s The Fierce People. Now, in a landmark account based on a decade of research, the author reveals the grim consequences of ambition and exploitation.