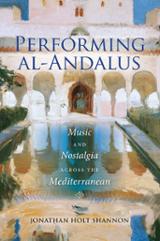 Terranova, Nadia Terranova, Nadia Adiós fantasmas
Performing al-Andalus explores three musical cultures that claim a connection to the music of medieval Iberia, the Islamic kingdom of al-Andalus, known for its complex mix of Arab, North African, Christian, and Jewish influences. Jonathan Holt Shannon shows that the idea of a shared Andalusian heritage animates performers and aficionados in modern-day Syria, Morocco, and Spain, but with varying and sometimes contradictory meanings in different social and political contexts. As he traces the movements of musicians, songs, histories, and memories circulating around the Mediterranean, he argues that attention to such flows offers new insights into the complexities of culture and the nuances of selfhood.

Gardiner, John Eliot Bach: Music in the castle of heaven

AAVV The rise of David Bowie

Fernández Pan, Sonia You Got to Get In to Get Out

Flea Acid for the Children